My name is Teije Wijnterp, which in 1988 I started to list as simly ‘Teye’, because that was much easier on the tongue in different languages, first on my 1988 Flamenco Guitar Solo-LP still with my last name listed too, but on the CD re-issues – and from then on – I was already simply ‘Teye’: That’s how I recorded with Joe Ely, and that’s how I started making my guitars. Now that I’m no longer with the company that now owns the trademark to  the ‘Teye’ name, I’ve gone back to being ‘Teije’. 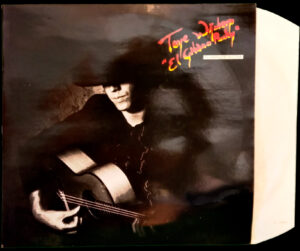 Born of Viking origins in the Netherlands, I was fascinated, nay obsessed with guitars. I started on the family piano at age 4 moving to guitar in 1968, then finally was able to acquire a terrible electric guitar which I immediately started modding, searching for the sounds that I heard in my head. 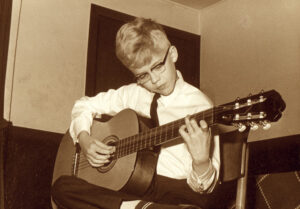 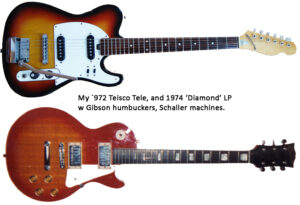 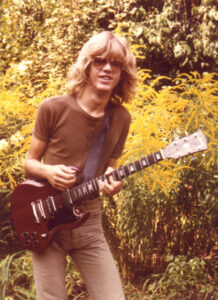 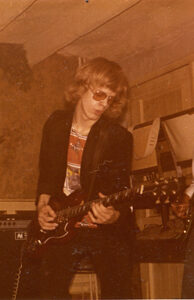 I bought my first decent guitar, a Gibson SG, and a few days later I sunk in the router to make space for a 3rd pickup. Never mind the warranty: innovation beckoned (and the switching I installed as a teenager is not all that different from my current 3-pickup Electric Gypsy guitars)

I did well in school, very well, and was slated for University but then decided I wanted to dedicate my life to the guitar. I performed and released independent records in the Netherlands, Germany, London and Paris.

Together with my father I built guitars and amps – most notably a bolt-for-bolt copy of my see-through Ampeg Dan Armstrong from a raw block of plexiglass.

Then I got a haircut and entered the Conservatory of Classical Guitar. This wild move was followed by another even more exotic: I hitch-hiked into flamenco music and was adopted by a gypsy family in Andalucia who taught me to play authentic flamenco guitar.

In Andalucia (southern Spain) I found plenty of the incredible moorish architecture that I had been so impressed with since as a young boy I devoured the works of Hal Foster. The fragile and intricate moorish beauty would feature heavily in my later guitar designs. Anyone who’s been to Cordoba, Sevilla and Granada will immediately notice.

I moved to the USA on invitation of country-rock cult legend Joe Ely and he released an album that mixed Joe’s Americana with my flamenco guitar: “Letter to Laredo” which made the 1995 year-end top ten of Spin and top 15 of Rolling Stone magazine.

I went on to form a pure Flamenco ensemble together with my wife Belen, a flamenco dancer from Sevilla, Spain, and we toured the world. I pioneered several inventions for this group: a footswitchable portable dance floor with built-in contact microphones, a MIDI-switched light show, a modular headphone practise flamenco guitar, and I helped perfect and fine-tune the fantastic B-band contact soundboard and undersaddle condenser pickup system.

And for myself I built a tube distortion pedal, a tube guitar amp, and my own design electric guitar. And then everything changed.

THE Industry Pros offered I serious money for this instrument, and so I started taking orders. My wait list grew to over a year and I teamed up with my record company boss Evert Wilbrink and started making guitars in earnest, expanding my line with affordable versions built by a team of employees.

This move was driven by my desire to offer my ‘ideal guitar’ to all those players who did not have the thick pocketbooks required to buy one of my top-of-the-line Master instruments, and during the decade following my first ‘S (Second) Series’ of 2008, I devoted an incredible amount of energy to make this desire become reality. S-, T-(Third), R-, F-, L-, E-(Emperor) series saw a constant improvement and many a new development. After constant customer prodding, and two one-offs, I started making basses too. And I came with new models: the Gypsy Arrow™ and Jazz Cat™.

Then I was basically booted out of my own company and Evert took over the business, and I was ‘permitted’ to build Master guitars in Sevilla, Spain, while the Kompany continued making guitars based on my old designs in the factory in Nashville. I had been in the very same position in 2014, with a team of venture capitalist ‘investors’ from Dallas, and I survived that too, plus I really don’t enjoy an assembly line where CNC-cut-parts make a yearly quota of pre-determined guitars. I enjoy the individual nature of my one-off Master guitars, where I carefully fine-tune components and circuitry to give the best possible end result.

The resulting Master guitar or bass is befitting of a King, a Sultan, a Maharadja in sheer luxury and opulence. Teye’s guitars routinely win direct A/B-comparisons with the most prized vintage instruments and reside at the top of today’s boutique market. But then they are so much more than just great guitars…

And then, in late 2018, the Dremel company sent a film crew to Sevilla to make the following:

When asked what is exactly the difference between the original A-series and my current Master instruments? All are hand-made and Hand-engraved by me, right?

Allow me to reflect:

“In 2004 I ordered the wood and aluminum to make my first A-Series. I created that guitar from my imagination out of the raw materials. Then people started placing orders with the understanding that I would build them one of those, so the next years I basically did that, with lots of room for customization and personalized engraving etc. But that pretty much sums up the original A-Series.

In 2008 I made my first La Perla™, which in 2009 literally led to my first La Llama™. Followed in 2010 by the El Dorado™ and then the Konstantinopolis™. I also made the El Doblon™ and all of those were breaking new ground for me, experimenting and solving new challenges. And those too, were re-orderable great guitars, the more special ones receiving the FS or fuera de serie (‘outstanding’) number prefix.

Then, in 2014 I was back in my workshop with lots of time on my hands and built an incredible crop of what were now called Masters (please see the Current Masters and the New Masters pages) I simply built what I was inspired to, one by one, and then the next, and THAT is how I want to do this: NO TWO are the same, every design brings new obstacles to surmount and new relief and elation when it all comes together. Of course, the basic guitar is still my original La India™ design which by now has gone thru many small improvements and fine-tuning.

But I am back at spending my life the way I want it, plus making the guitars that I really want to make: superb in every aspect and without compromises that inevitably are dictated by the need to produce.

So I am again working on my reputation as hermit: the following could have been MY motto: ‘Villa Don’t Call, Cause I’m Not Gonna Let You In.’
–

The above is my short bio. I’ve had a more elaborate one and then I have ‘THE ANECDOTES’: how I got to be adopted by the Gypsy Family from Cordoba; how I met Les Paul and what he had to say; how I performed with Bruce Springsteen etc. So for those who would like to read all that, please LONG BIO and THE ANECDOTES!