See the full story below that inspired Teye to make this guitar. And read the Vintage Guitar Magazine Review HERE 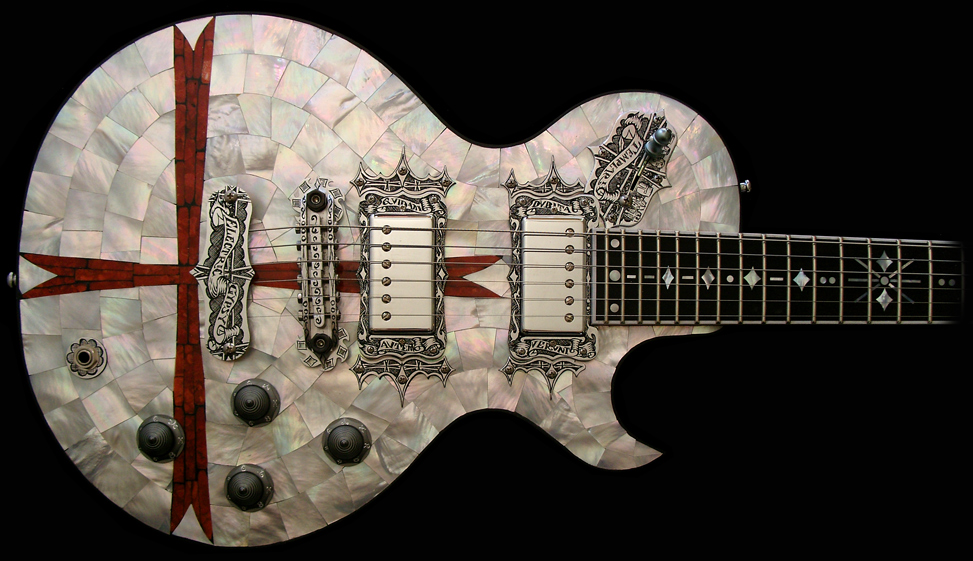 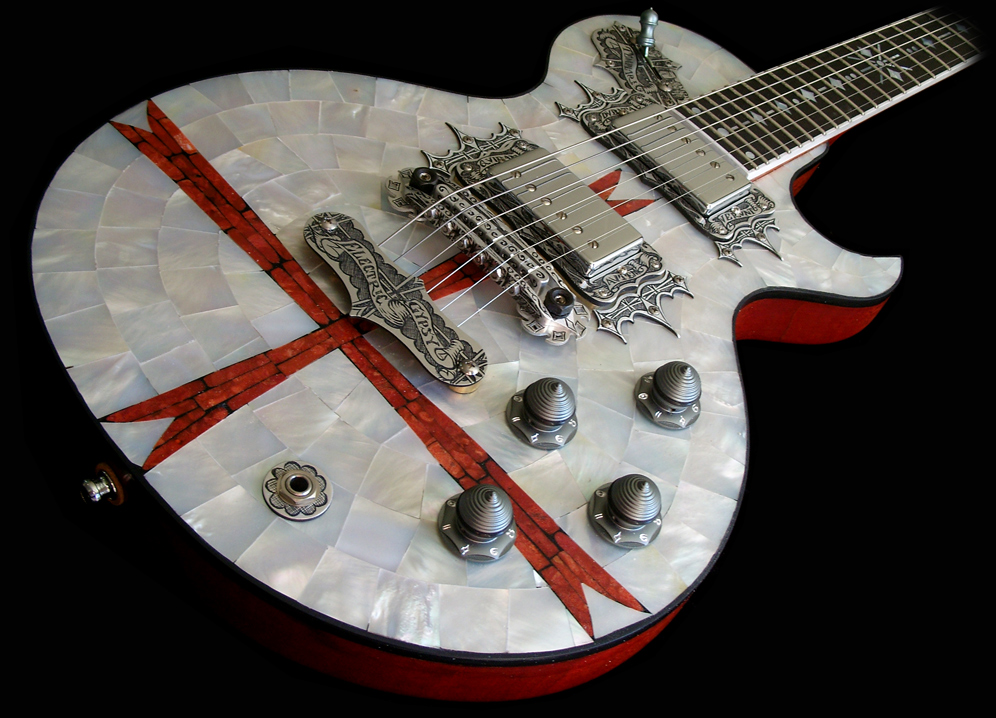 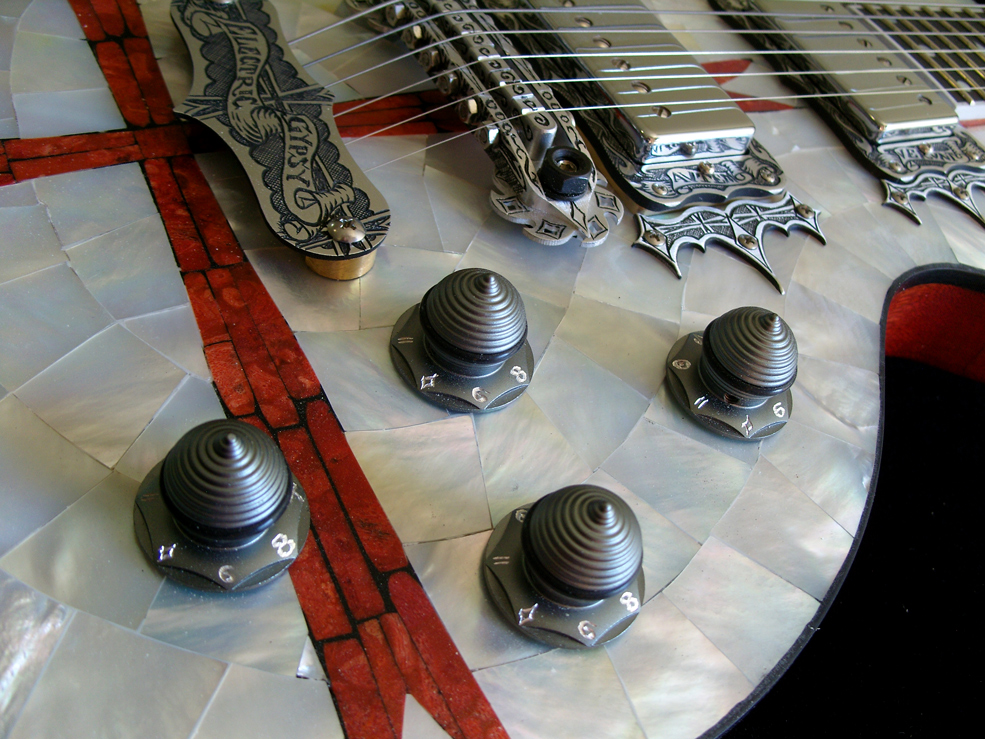 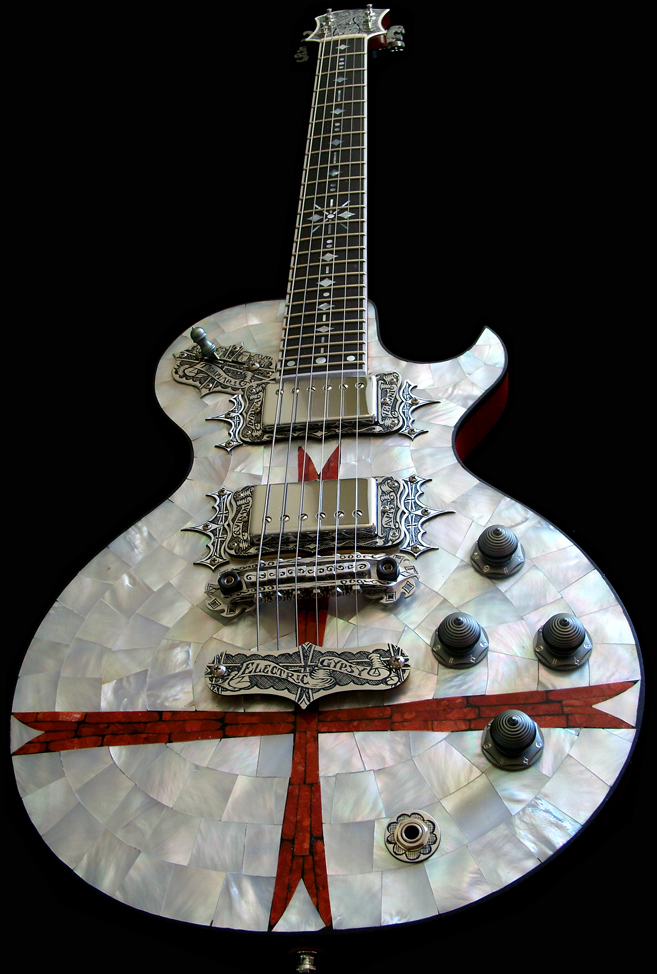 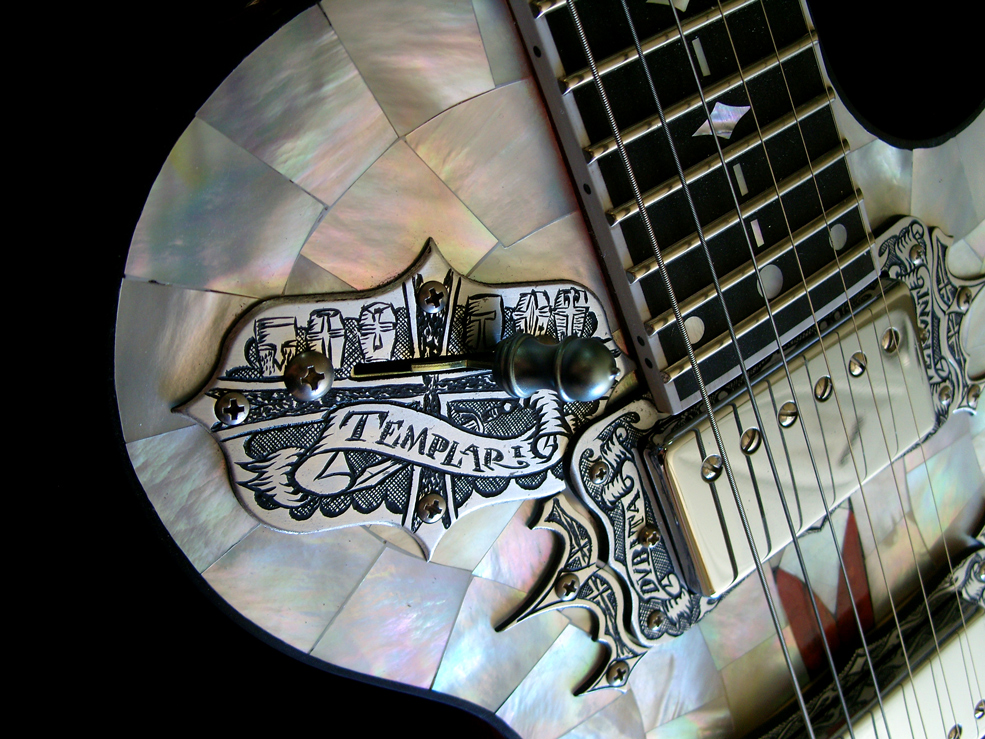 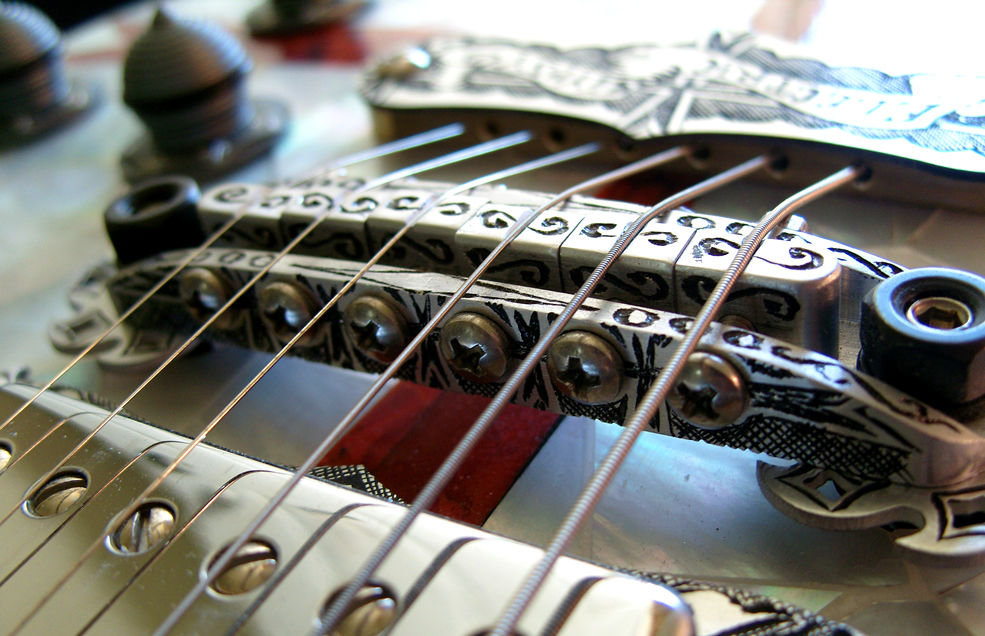 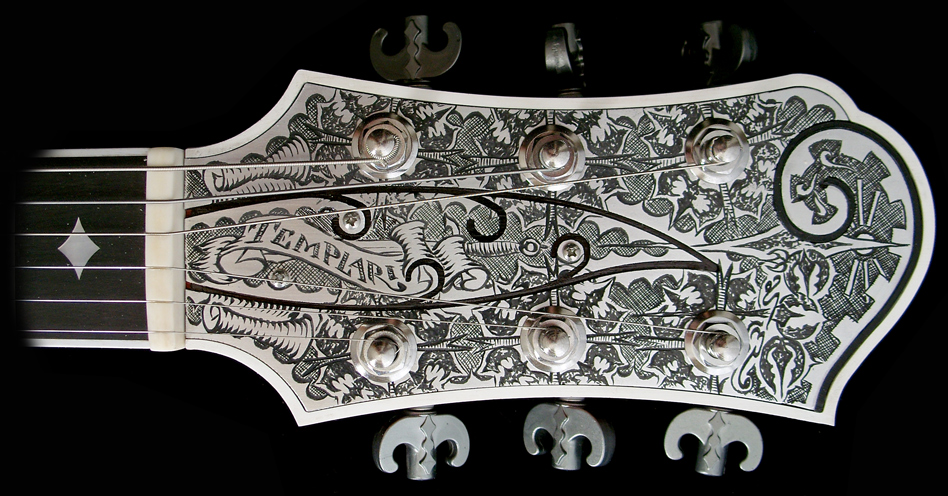 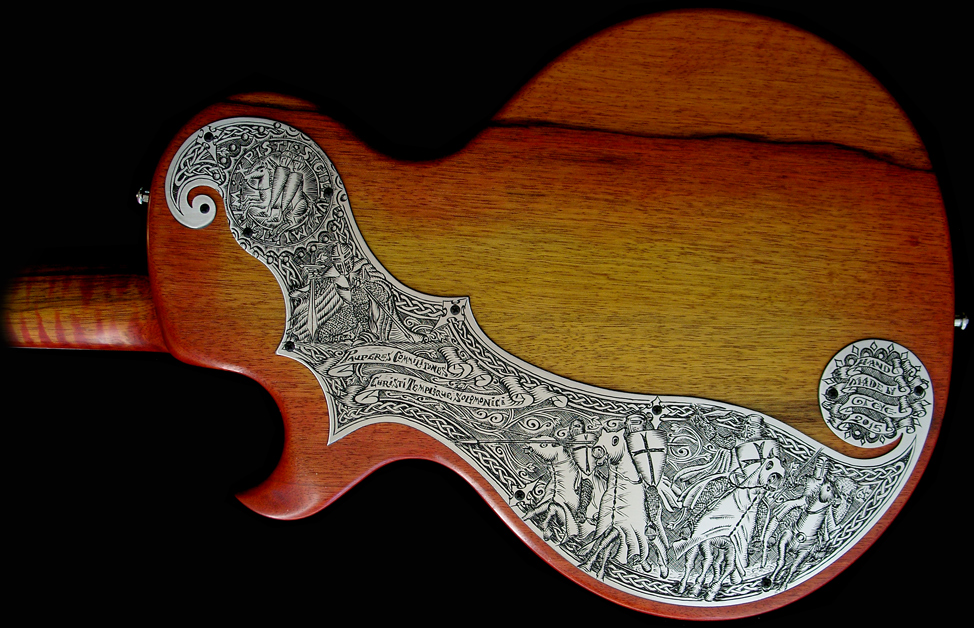 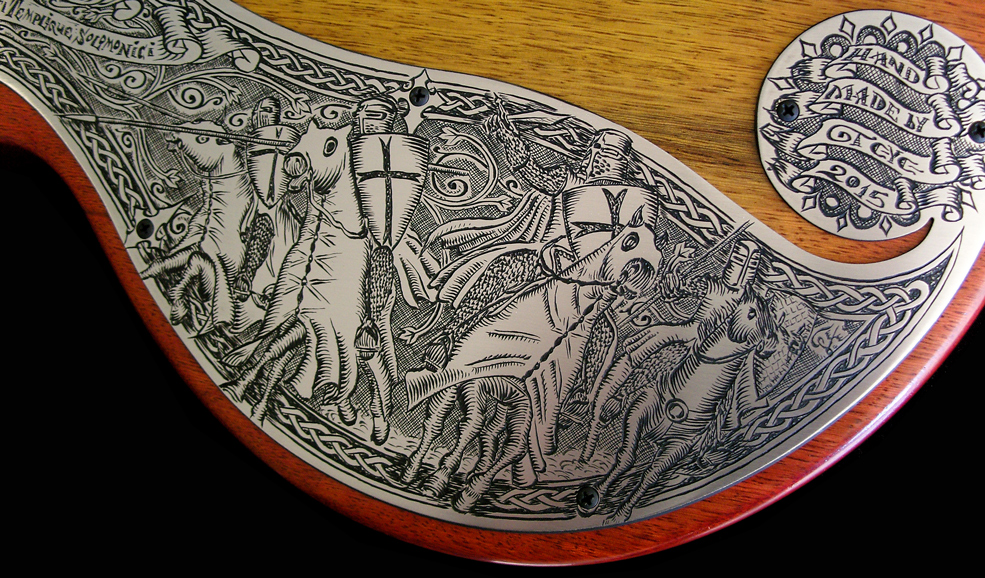 In A.D. 1119, the French knight Hugues de Payens approached King Baldwin II to propose the creation of a monastic order to protect Christian pilgrims on the roads between Jaffa and Jerusalem. Pope Innocent II endorsed the Order and exempted it from obedience to local laws (Omne Datum Optimum) and the King granted the Templars a headquarters in a wing of the royal palace on the Temple Mount. This Temple Mount had a mystique because it was above what was believed to be the ruins of the Temple of Solomon. This was the official beginning of the order of the ‘Poor Knights of Christ and the Temple of Solomon’ or ‘Templars’, an order originally consisting of 9 knights, including Hugues de Payens, Godfrey de Saint-Omer and André de Montbard. In the beginning they were so poor, that their logo was of two knights sharing a horse, surrounded by the words ‘Sigilum Militum Xristi’ (Seal of the Warriors of Christ) but this poverty did not last: indeed they grew to be one of the most wealthy and influential powers of the epoch, and their knights reportedly were the best fighters of the crusades. They actually invented the Travellers Cheque, you could buy a guarantee letter, with gold, from the Templars in Paris and then exchange that letter again in the Templar’s headquarters in Jerusalem. Thus they became the first ever Multi-National company) Their political and financial influence grew so strong during the next two centuries that their status came to be seen as a possible danger to church and state. At dawn of Friday October 13, 1307, King Phillip IV of France had Templar Grand Master Jaques de Molay and scores of Templars arrested (hence actually comes the reputation of ‘Friday the 13th’) and Pope Clement V issued a papal bull instructing all Christian monarchs of Europe to arrest all Templars and seize their assets. Under torture the Templars admitted to the most horrific heresies and Pope Clement disbanded the order. De Molay and others were burned at the stake in Paris.

The order of the Knights Templar and its lore (including many conspiracy theories) has proven to be of irresistable attraction through the ages. Their emblem of a blood red cross with forked ends on a pristine white shield has been represented on this guitar, and all engravings depict Knights Templar lore. This has been a very personally gratifying build for me, reflecting both childhood fantasies and current geopolitical knowledge, and projecting it all on a fantastic sounding and looking instrument.